The Annual General Meeting of Louth Branch RTAI took place in the Monasterboice Inn (Donegan’s) on Monday 14th November 2022. Details of the next meeting will be published here as soon as they become available..

Tribute to Bartie Woods RIP and report on AGM 2019

At the beginning of the AGM a warm tribute was paid to our esteemed Cathaoirleach, Bartle Woods who had died on Thursday 14th November after a short illness.
Leas chathaoirleach, Anne McCoy described Bartle as a true gentleman, a dedicated teacher in the Monastery BNS, Ardee who touched the lives of so many people. After his retirement he continued teaching music and was involved in many aspects of community life, history, the Credit Union, Scoraiocht Lann Leire. He loved to travel and was fluent in several languages. He had a special love of Gaeilge and traditional music and endeared himself to everyone who had the pleasure of knowing him. A minutes silence was observed.
Ni bheidh a leitheid ann aris.
The AGM was attended by RTAI National President Matt Reville and the talk by guest speaker, well known Nutritionist, Gaye Godkin was well received by all present. The newly elected committee will organise a variety of events for members during the coming months.
The meeting was followed by lunch.

Members of the Louth branch took part in a most enjoyable trip to the Seamus Heaney Home Place, Belaghy on August 12th. Below: the group pictured in the centre. 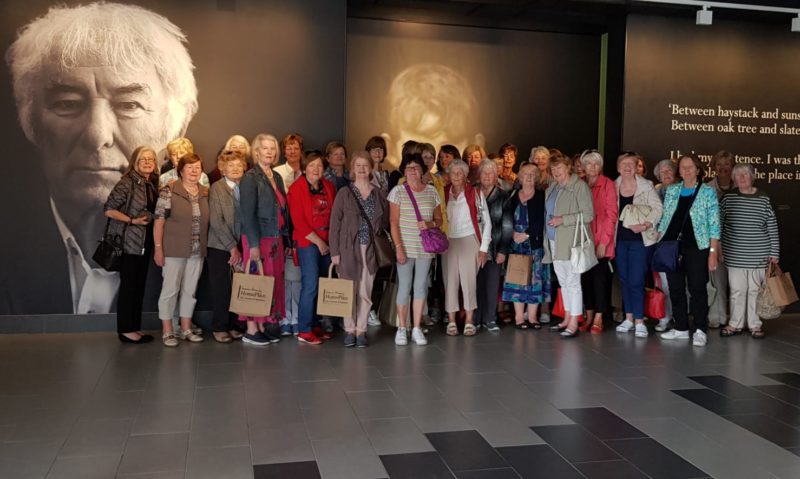