Details of the next meeting will be posted here as soon as they become available.

Members of Kerry RTAI branch met up for a very enjoyable day in Killarney on October 14th, 2021. This was our first in person event since the Covid crisis began and members were delighted to be out and about together again. 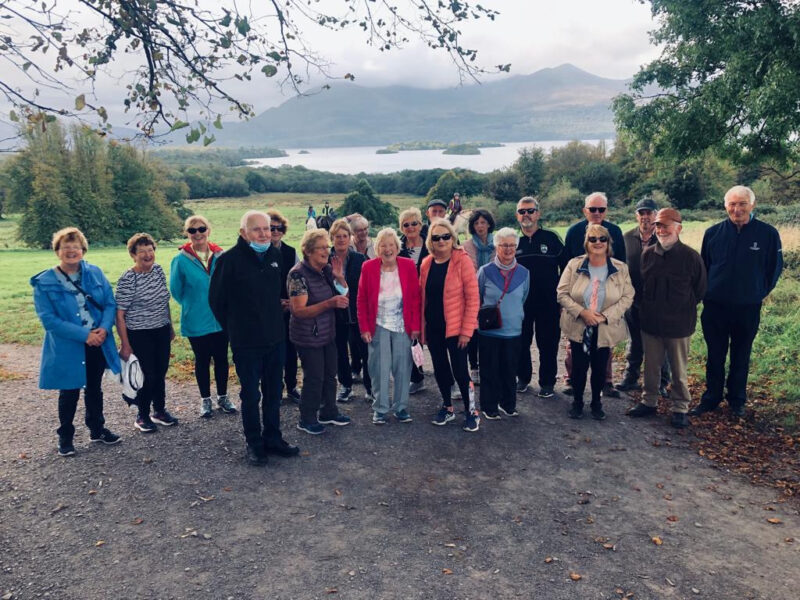 Below is a gallery of photos taken at the event. (All photos courtesy of Eamonn Keogh.)

In order to enlarge a photo, simply click on it! 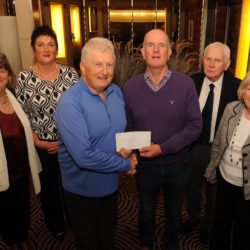 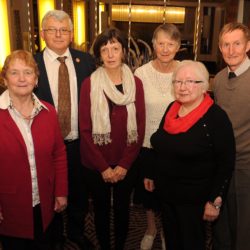 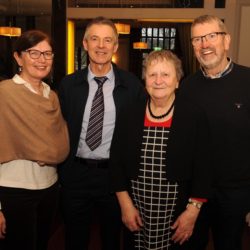 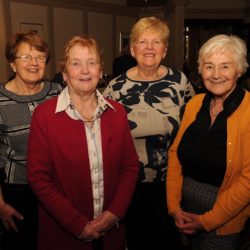 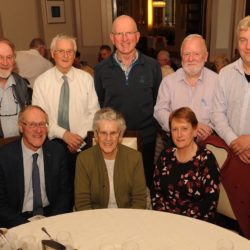 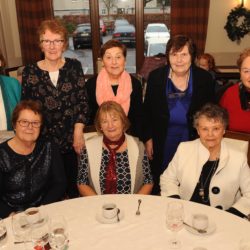 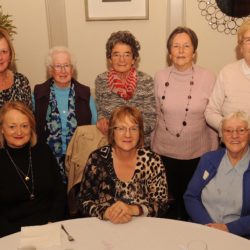 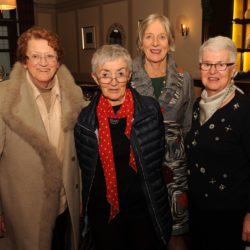 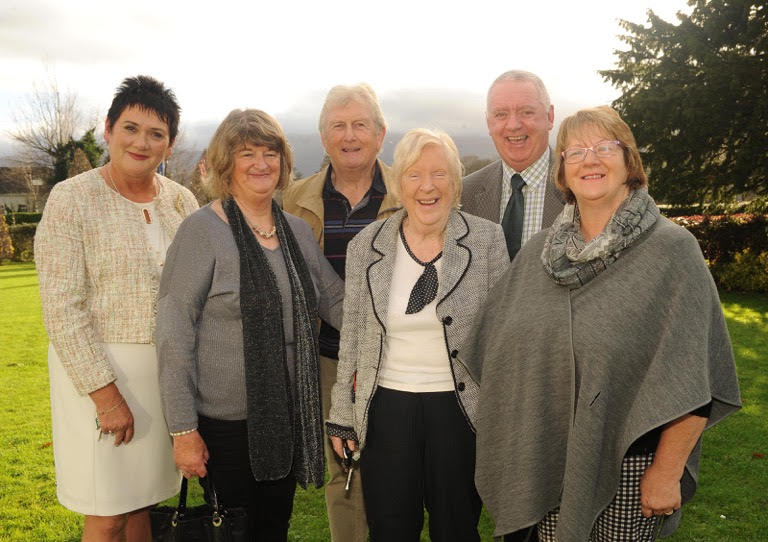 Retired Teachers’ Association of Ireland (RTAI) Kerry Branch members a their AGM and dinner in The Brehon Hotel, Killarney.

The R T A I (retired teachers association Ireland) Kerry Branch, held their A G M at the Brehon hotel ,Killarney on Wed 4th. December.
The meeting was very well attended with 86 members present.
Proceedings began with a mass in honour of our deceased members at 11 a m. We thank Fr. Kieran O Brien for saying the Mass.
The meeting followed and was very informative for our members.
Understandably at such a meeting issues of pension, taxation,etc were discussed. We are indebted to Brian Mangan from the National Executive
Committee(NEC) for the information he gave us.
Reports were given by our Treasurer ,our Secretary and by our Social Secretary.

All officers were re elected unopposed. I suppose it is easier get into a voluntary position than it is to get out, or perhaps people are happy that the officers are doing the work.
The social side of RTAI is very important and many interesting things were undertaken in 2018. There were a number of walks undertaken in Listowel ,Killarney , and in West Kerry especially to Loughadoon where Br Daithí O Conaill was giving very valuable and interesting information on the passage tomb ( akin To Newgrange) which has been uncovered there.
We had a very interesting day visit to Spike Island in Cork in the most pleasant of weather.
We are already planning events for 2019. We are travelling to Annascaul to visit the birthplace and tomb of Tom Crean and also of Sculptor Jerome O Connor. There will be many more exciting trips also.
At the conclusion of the meeting we enjoyed a most pleasant and enjoyable lunch at the Brehon.
A presentation was made to Fr. Kieran for his help and consideration in saying the annual Mass.

The Retired Teachers’ Association of Ireland (RTAI) Kerry Branch made a presentation was made to Killarney Parish Adm Fr. Kieran O’Brien to mark his 25 years as a priest at their AGM and dinner in The Brehon Hotel,Killarney. Included are Julie O’Connor (Secretary) and Maireád Uí Bhrosnacháin (Treasurer). 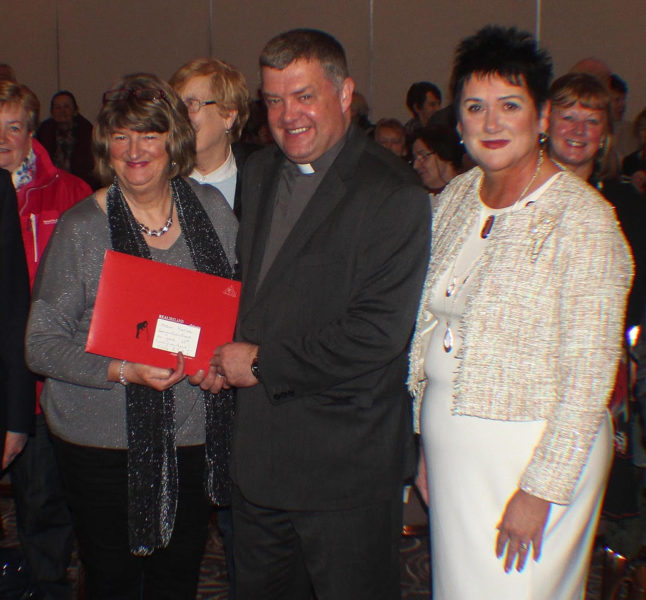 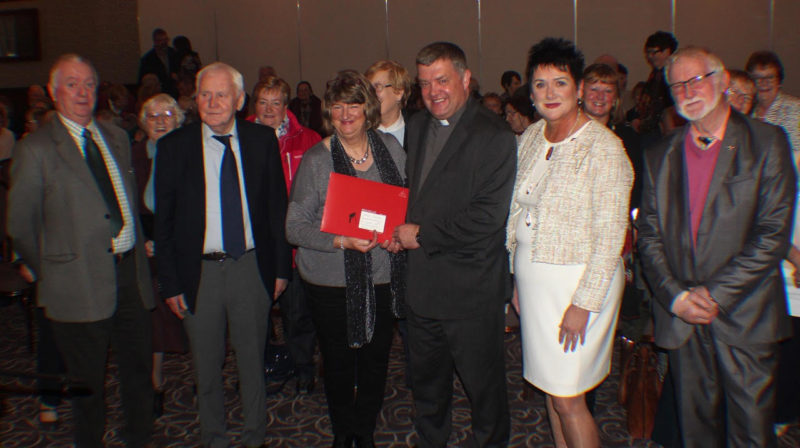 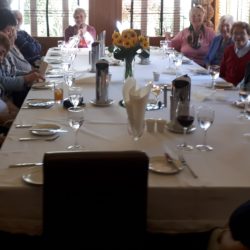 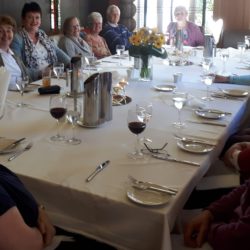 Pictured at the Annual General Meeting and Dinner of the Kerry Branch of the Retired Primary Teachers where presentations were made to Micheál Ó Súilleabháin retiring Chairperson and Bríd Cronin retiring Secretary/Treasurer. Also in picture are Brian Mangan, National Executative Representative for Kerry, Limerick and Clare ,Mairéad Uí Bhrosnacháin, Treasurer, Julie O’Connor, Secretary and Fr.Kieran O’Brien Adm. Killarney, who celebrated the Annual Mass for current and deceased members of the Kerry Branch of R.T.A.I.

The Kerry  branch has 450 members and those Retired Teachers who have not as yet joined the R.T.A.I. are urged to do so as we need a vibrant association in our fight for full pension restoration for all teachers and parity with serving teachers.

In 2017 on the Social side members did a number of organized walks, visited Kells Gardens, did a trip to Listowel to the John B. Keane’s Pub to be entertained by Billy, visited the Seanachaí Centre, did a guided walk of Listowel town with evening dinner in The Listowel Arms Hotel. Members attended a number of informative talks including a talk by Dermot Goode on  Total Health Care  and Health Plans on the invitation of  the Limerick  Branch R.T.A.I.

Trips and Talks are currently being  organized for 2018. History of the Kerry Branch of RTAI

On Thursday January 25th 1973 a group of retired primary teachers from all parts of the county met in the Grand Hotel, Tralee, with the object of reviving the Kerry Branch of” Pensioned Teachers Association”  which had become inactive for some years. The meeting was convened by Jerry Allman on the suggestion of Dan Finn, Dublin, Secretary of P.T.A.  & Tom Lynch of Limerick. Those present were enthusiastic in supporting the revival. Liam Langford, Killorglin was unanimously selected as Chairman & Jerry Allman, Causeway as Honorary Secretary .The meeting agreed to support the association in it’s demands for:

Members from each of the 9 I.N.T.O branch districts in the county were appointed to collect the names & addresses of retired teachers in their area & forward them to Jerry Allman without undue delay. Members were requested to contact retired members of religious orders. Contact was not to be made with retired lay teachers who were not members of the I.N.T O. while in service.

The following were appointed:

It was also decided that contact should be made with other retired state pensioner associations i.e. Army, Gardaí, Civil Service etc. with a view to pursuing a common policy for the future.

An initial membership fee of £1 was agreed. A general meeting was arranged for Saturday March 10th1973 to be held in the Grand Hotel, Tralee.

The first Annual General meeting of the revived Kerry Branch of the Pensioned Teachers Association was held in the Grand Hotel, Tralee on Saturday March 10th 1973. The meeting was well attended with members & intending members present from all parts of the county. Judging from the subscriptions forwarded to Mr. Dan Finn, the membership  was in the region of 65 to 70.  It was agreed that meetings should be held twice yearly. The next meeting was fixed for Killarney for October 1973.

On October 4th 1975 Mass was celebrated in the Franciscan Friary, Killarney for deceased members prior to the Half-Yearly meeting which was held in the Royal Hotel, Killarney. The tradition of celebrating Mass for deceased members prior to the winter meeting has continued each year since then. Afternoon tea was served after the meeting & that practice continued each year & was replaced with a Christmas lunch in 2002. Afternoon tea continued at the summer meetings until 2012 & was replaced with a lunch in 2013.

In 1977 the name changed from “Pensioned Teachers Association, Kerry Branch ” to “Association of Retired Teachers, Kerry Branch”. It was also decided in 1977 to increase the annual subscription from £1 to £2 because of the rising cost of postage & stationery. In !981 the Annual Subscription was again increased from £2 to £3. Again because of the cost of postage & stationery.

In 1983 the system of having the Annual Subscription deducted at source was introduced.

The word “parity” was common to every meeting up to 1984 & is now discussed again at meetings since 2009.

All his life Jerry fought for better conditions for teachers and was elected President of the I.N.T.O. in 1967. It was during his term in office as President of the I.N.T.O. that the teachers of Ardfert & Kilmoyley schools went on strike over the conditions of their school buildings. As one of those striking teachers I must put on record the tremendous support we got from Jerry Allman, Brendan Scannell & Sen. Jackie Brosnan & they were in daily telephonic communication with us. The three of them worked behind the scenes during that strike and they are due an enormous amount of credit for its effects. The strike led to improvements in National Schools all over the country.

Jerry retired from teaching in 1972. In 1973 he revived the Pensioned Teachers’ Association, Kerry Branch which had become inactive for a number of years and was elected its first Honorary Secretary .He worked tirelessly for the R.T.A.in Kerry & because of his hard work & dedication he saw its membership and influence grow year by year. Jerry Allman was elected Honorary Secretary of the R.T.A. Kerry Branch on March 19th 1983  for the 11th time but unfortunately had  died before the next meeting in October.  He had requested to be relieved of the secretary’s position a number of times over the previous 3 years.

Brendan Scannell was appointed secretary of R.T.A, Kerry Branch on the death of Jerry Allman. Brendan continued the great work started by Jerry Allman and fought for better conditions for retired  teacher but unfortunately ill health forced him to retire as secretary. Brendan passed away in 1986.